Farzana Haroon
17 Aug 2016
Once every four year's advertisers have a brilliant opportunity to capitalise on the world's greatest sporting event and align their brand with the Olympics Games. In the lead up alone, 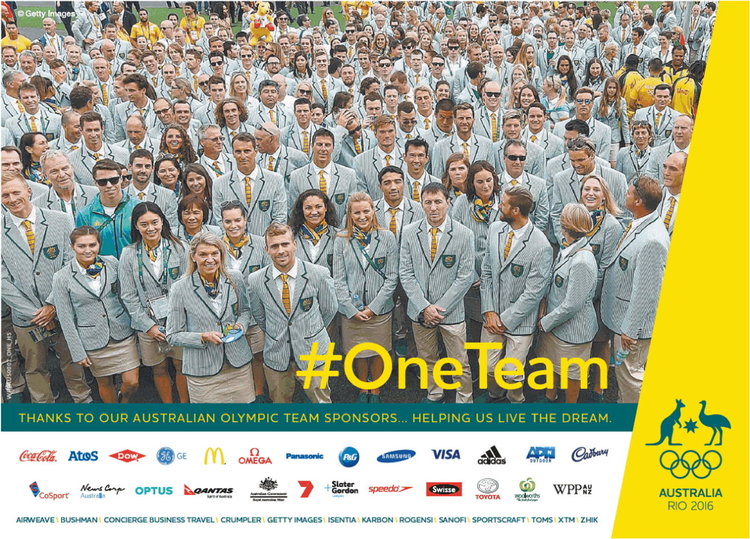 Although the 2016 Rio Olympics Opening ceremony failed to win gold for the Seven Network with the lowest Olympic Ceremony OzTAM rating figures since the OzTAM system began in 20012, we have seen a number of brands cashing in on the world’s biggest sports carnival. While the 11-13 hour time zone difference may have deterred many viewers from tuning in for the Opening Ceremony, keep in mind that the Rio Olympics is the first of its kind in Australia to offer real multi-channel, free-to-air digital coverage across Network 7, 7TWO and 7Mate. This coverage is complemented by free live streams and the option to upgrade to a paid subscription service (free for Telstra mobile customers) to access 36 live streams and catch-ups so viewers can select the content they want to watch.

Swisse, an official telecast sponsor, feature Olympic ambassadors in their motivational “Powering Australian Olympic Dreams” campaign. Aussie sisters and swimming champions Cate and Bronte Campbell, hockey player Chris Ciriello, high jumper Eleanor Patterson and paralympian tennis player Dylan Alcott are among 13 athletes sharing their inspiring stories about what drives them to do what they love. Swisse is promoted as “The Choice of the Australian Olympic Team,” the conversation extending to social media with #Swissepoweringdreams.

BigDatr first captured Swisse Cate & Bronte Campbell's creative on the 11th July 2016 and has appeared in The Sunday Herald Sun, The Sunday Mail, The Sunday Telegraph, The West Weekend, The Courier Mail and The Daily Telegraph

In contrast, McDonald’s (an official sponsor) campaign focuses on the “We're for Aussie legends Olympian or not," depicting average Australians doing the maccas run for the family who are watching the games early morning. In another ad, a couple having trouble waking up from watching the Olympics all night are swayed by the aroma of a hash brown. Pre-Olympics we saw McDonald’s “Friends win" campaign, heavily promoted on Youtube, with children from all around the world learning Portuguese in their daily activities in anticipation of winning the opportunity to be a part of the Olympic Opening Ceremony. This campaign was supported by Network Seven’s Sunrise program and was strongly integrated with social media with a competition condition being that a video showing what friendship means to a child having to be uploaded to Instagram or Twitter.

Coca-Cola’s approach celebrates both Olympians and non-Olympians with the message “Anyone can be Gold,” with its “Coca-Cola Goes for Gold" campaign highly active on social media with #ThatsGold trending globally. The campaign draws associations between winning gold and tasting Coca-Cola, predominantly targeting the teenage market via global influencer networks producing and distributing content. In Australia, Olympic ‘dancing’ hurdler Michelle Jenneke is the campaign ambassador both in the TVC and with her postings on social media.

"Share the Gold" campaign let's audience know that gold is attainable for both Olympians and non-Olympians, simply by enjoying Coca-Cola! This campaign is still active and first appeared on the 31st July 2016

Non-sponsored brands running Olympic-themed campaigns wanting to join in on the hype need to tread carefully to avoid licensed ambush marketing. Telstra (not an official sponsor of the Olympic games) breached The Olympic Insignia Protection Act by pushing misleading ads, promoting Rio Olympic coverage in the “I go to Rio" campaign and “Watch every event in Rio live with Olympics on Seven and Telstra". Telstra had to take down the ad and then re-launch the campaign with the disclaimer: “Telstra is not an official sponsor of the Olympic Games, any Olympic Committees or teams". Direct competitor brand Optus is an official sponsor, taking a humorous approach featuring Ian Thorpe and Lee Lin Chin in #FanUpAUS ad campaign, however the campaign did not air on Seven.

Another brand which sparked controversy is Samsung (Worldwide Olympic partner) with the evocative TVC “The Anthem" (part of the “Do What You Can’t" campaign). As a ‘Proud sponsor of a world without barriers,’ Samsung blends the national anthems of 14 countries, closely resembling the Coca-Cola’s 2014 Super Bowl ad “America the Beautiful" where the song was sung in different languages to capture the unity of multiculturalism. Despite the obvious similarities, Samsung’s execution of “The Anthem" campaign taps emotional triggers and portrays a heartwarming unity which is what the Olympics is all about.

Samsung's "The Anthem" celebrates 'One World, One Anthem'

Olympic Campaign Round Up

View BigDatr Ratings to see campaign TARPs during the Olympics