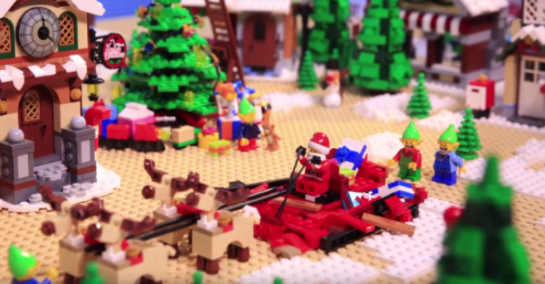 Harvard Business Review, the authors found: “A euro invested in a highly creative ad campaign had nearly double the sales impact of a euro spent on a non-creative campaign.”

The toy industry in particular tends to instill creativity in their ad campaigns, and it helps leverage their products especially in the lead up to Christmas!

This campaign is part of a competition, calling on kid-spiring LEGO builders to help, “Santa’s sleigh is broken and he needs your help."

LEGO has launched its special Christmas campaign with eight episodes available on YouTube and on their website, using LEGO products as the characters to tell the story.

This year’s campaign didn’t incorporate any voice-overs or text, which means it will transfer well across websites where users do not necessarily have headphones plugged in, such as Facebook and Instagram.

Kids aged between 4-14 years are invited to create their own version of Santa’s Sleigh using LEGO bricks and submit their entries. Winners receive awesome LEGO prizes and get a chance to have their works featured in upcoming episodes.

LEGO has invited kids to contribute to the story and compete with other LEGO builders to come up with a sleigh-spiring ending!

This campaign produced by Mammal and Brightworks used TV and out-of-home advertising.

Meet Crayola’s Spokes-Crayons - they colour our world “one creative project at a time.”

Like LEGO, Crayola uses animation to bring their products to life. Each crayon has personality and the audition context sets up the ad-scape to show off what they each can do with Crayola’s products.

Kids can learn more about Denny, Scarlet, Rod & Gus and watch their audition outtakes on the Crayola website.

Kids are ready to compete, and Hot Wheels knows it.

The Hot Wheels Criss Cross Crash 30-second TVC was first published on YouTube last October. The ad has been adjusted for Christmas - adding in an a tagline at the end of the video: “Unwrap Epic This Christmas. Make it Epic!”

Unlike LEGO and Crayola, Hot Wheels didn’t incorporate product animations. Hot Wheels did have more of a product emphasis, using imagery to show how kids can line up their cars and enjoy watching them collide through its 16-feet long intersection track.

Each of these brands used TV advertising, but LEGO was the only one to support their campaigns with out-of-home advertising.

Whose campaign do you think will have the most impact on sales?