Avrill D'Costa
15 Aug 2019
We ran multiple ad tests past a 1000-strong sample of the Australian market; aged 18-65+ years, gender non-biased. The results have been weighted to be representative of the general Australian population, with respondents spanning multiple facets of the market. The areas which were assessed and scored include Recall, Brand Recognition, Engagement, Relevance, Likeability, Comprehension, Differentiation and Brand Consideration. The luxury vehicle segment has a new leader when it comes to best performing advertising creative. BigDatr has used its unique position in market to conduct an unbiased comparison of TV advertising commercials across the Automotive industry, focusing on the sophisticated and ever-competitive luxury market.

Both Lexus and Audi have local creative agencies engaged to produce advertising creatives tailored to market which carries a price premium. Does this give them the edge over the competition?

The international ads repurposed for our local market

Mercedes-Benz and BMW opt to reuse international creative as the foundation for their campaigns, with localisation tweaks. This carries a significantly lower cost as concept originated is largely global. Does this method still provide the luxury giants with as great cut through, enabling greater investment in premium ad space Vs creative costs upfront? 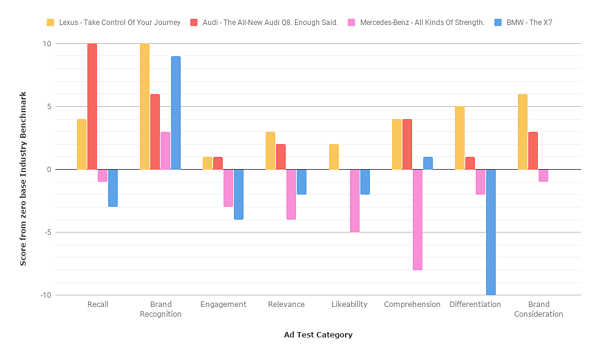 The benchmark is defined as zero (0) base in the charts: derived by testing comparative advertising campaigns across Lexus, Audi, Mercedes-Benz, BMW, Volkswagen, Genesis, Volvo, Infiniti and Land Rover. In this case, zero (0) denotes the industry average or 'benchmark'. A positive score indicates where the advertising creative performs better than average and a negative score shows where there is room for improvement.

With the Audi campaign running in market the longest and $2M+ worth of media spend allocated, we're unsurprised it does perform well for Recall. Expect the scores for Lexus and Mercedes-Benz to increase over the coming months as these campaigns continue to run and become more familiar.

All brands scored higher than the industry benchmark, although Mercedes-Benz surprisingly lower. We did expect BMW to rank lower for recognition given the ad contains the smallest logo comparatively with the supporting text "Bayerische Motoren Werke" potentially unrecognisable to many (hint... it's BMW). Given the BMW X7 has that incredibly large signature front grille, this might make up for this, although Lexus still pips BMW to the post!

All brands score fairly low on this classification, the biggest contributing factor for Engagement seems to be differentiation; people like to watch something they identify with as both new and unique. Although not in the comparison here, the new Land Rover Evoque campaign scores top marks in this area, be sure to take a look.

The locally-made TVCs from Lexus and Audi take the win here. Potentially, this suggests that ads do reap benefits among a viewing audience when created with the local market in mind. Are the gains significant to justify the premium in cost? We'll leave that for you to decide when analysed amongst the many contributing factors to an ad's success.

The Lexus creative ranks the most likeable of the bunch: the idea of quitting the job you don't enjoy and taking control of your life seems to resonate with the market (particularly amongst those aged 35-65 years). Mercedes-Benz however scores very low in this area with the advertising most disliked by 35-44 year old males. This could be an indicator of a lack of Comprehension - if you can't understand the ad you simply don't like it...?

The of-the-moment trend seems to be "dark" cinematic advertising in the luxury segment, it doesn't hurt to turn up the brightness to make things easier to follow. Mercedes-Benz once again scores very low for Comprehension, with both males and females in the 45-54 age band struggling to understand the ad. The Comprehension score is even lower for both genders aged 65+.

This creative on first inspection seems risky by Lexus, but it has hit the mark with the intended audience. Seemingly, it's a TVC that stands out when lined up against the competitor set. It's also worth taking a look at the Infiniti - The New Infiniti Q50. Empower The Drive. campaign supported by NBA All-Star Stephen Curry that also scores high for Differentiation.

For those that Lexus targets in the 35-44 age bracket, this ad scores seriously high points with the vast majority - catapulting Lexus into their intended purchaser consideration set. A goal that Lexus no doubt had set its sights on.

Lexus wins this head to head by a slim margin over Aud. Below is the breakdown of exactly where the Take Control Of Your Journey campaign has the edge over the competition. 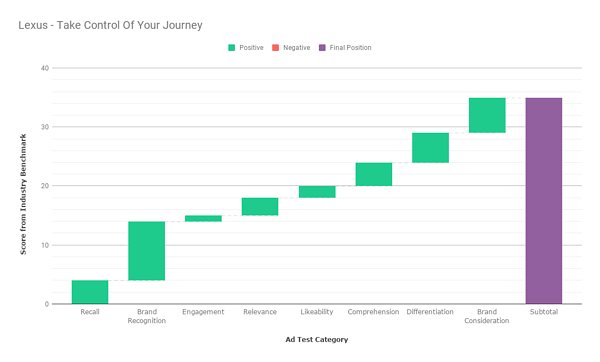